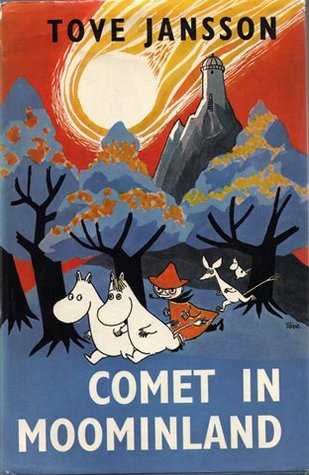 Moomintroll’s quiet life is upended when foreboding images of a star with a tail send him journeying to speak with the Professors at the Observatory. Meeting new friends along the way and forging through perilous adventures together, Moomintroll and his companions arrive at the Observatory where they learn a comet is headed towards earth. Worse yet – the comet is predicted to land precisely where Moomintroll lives with his Moominpappa and Moominmamma. Moomintroll must find a quick way home if he’s going to warn his family in time. 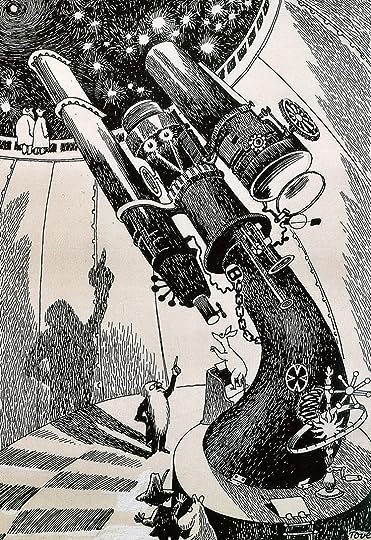 It’s not difficult to see why ‘Moominmania’ exists. Jansson’s book conveys an innocence rarely found in modern titles. An undeniable charm exudes from her fanciful characters – the same type of odd yet memorable creatures one anticipates finding in an L. Frank Baum novel.

Moomins have a simple way of life. Their relaxed attitudes, gardens, and lovingly prepared meals are reminiscent of Tolkien’s hobbits. In fact, Jansson’s descriptions of the whimsical setting often invoke the sense that one is reading about an alternate Shire – a feeling made more robust by Moomintroll and his friends journeying to the Lonely Mountains.

Halfway up the hill on their way grew a clump of blue-trees covered with big yellow pears, and of course they couldn’t get past that without Sniff deciding that he was hungry.

It certainly looked mysterious. Overhead the branches of the plum trees, oaks, and silver poplars met and formed a dark tunnel which led away into the unknown.

Despite the impending threat of a comet hitting the earth, Moomintroll and his companions are relatively carefree. They remain (mostly) focused in their task to hurry home as they’re shuffled from one peculiar instance to the next. The narrative lacks a sense of urgency, yet there’s something cathartic about the sweet simplicity of Moomintroll’s adventure. 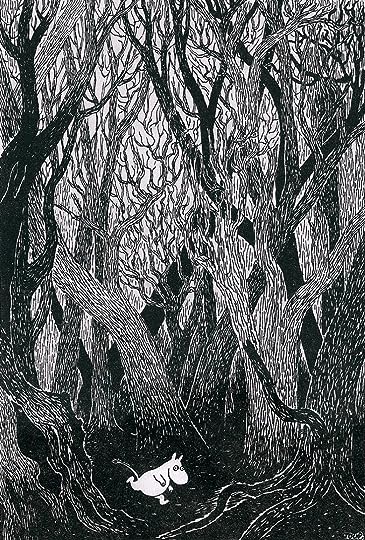