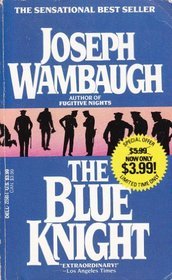 Ex-cop turned #1 New York Times bestselling writer Joseph Wambaugh forged a new kind of literature with his great early police procedurals. Gritty, luminous, and ultimately stunning, this novel is Wambaugh at his besta tale of a street cop on the hardest beat of his life.

Twenty and two. Those are the numbers turning in the mind of William “Bumper” Morgan: twenty years on the job, two days before he “pulls the pin” and walks away from it forever. But on the gritty streets of L.A., people look at Bumper like some kind of knight in armorthey’ve plied him with come-ons, hot tips, and the hard respect a man can’t earn anywhere else. Now, with a new job and a good woman waiting for him, a kinky thief terrorizing L.A.’s choice hotels, and a tragedy looming, Bumper Morgan is about to face the only thing that can scare him: the demons that he’s been hiding behind his bright and shiny badge…