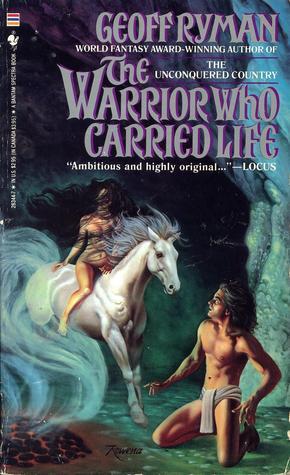 ISBN: 9780553263442
Pages: 198
Description: In his “History of Science Fiction”, Adam Roberts came up with a nifty way of dividing hard science fiction (SF) from soft SF or fantasy, saying that fantasy and soft SF followed in the footsteps of Dante and others who’ve a more catholic, a more religious or spiritual bent to their writing. Think of Tolkien, of Lewis. Or in the world of SF, the messianic stories of Dune. Roberts places the rise of SF in the 1600s and onwards as part of the conflict between Protestantism and Catholocism and well, science, of course. Cyrano de Bergerac’s “Voyage to the Moon” (ca. 1650) for example, has lots of science in it (talk of germs and flying machines), but it also posits the moon as the Garden of Eden from which God expelled us curious humans to Earth. Such heresy would not have been tolerated a hundred years or so earlier, but by Bergerac’s time, such merging of religious and scientific speculation didn’t quite set the stakes a-burning.

Wait isn’t this review about Geoff Ryman and “The Warrior Who Carried Life”? And isn’t it a fantasy book and not science fiction? Yes and yes. Trust me, though. The thing about “The Warrior Who Carried Life” is that it’s very much in the spiritual/theological part of the speculative spectrum (ooh, alliteration). Ryman’s story follows in the footsteps of those SF and fantasy tales like Dante’s “Divine Comedy” or Bergerac’s “Voyage to the Moon”, in which the stories of Christianity are reinterpreted or reinvented through some novel POV. In Ryman’s case, that POV is the sword and sorcery sort of fantasy that became dominant after Tolkien resurrected the genre in the 50s.

And yet, the book’s not quite like anything I’ve ever read before. You’ve got your mystical bad guys who can’t be killed and your suspiciously secretive sect of magical women, sure, and you’ve got your young village girl Cal Cara Kerig who witnesses her mother’s death and the ruination of her family before setting out on a revenge fueled journey that will introduce her to the wider world (it’s a good thing we don’t all require the maiming/death of our parents or aunts and uncles to get us out of the house). Heck, you’ve even got the kind of lazy city naming that marks so many fable-tastic fantasies (the Village by Long Water, the City of Better Times). But the brutality and beauty of Ryman’s writing (torture, deformity, everlasting gobstopper mystical flowers…what have you), along with the narrative twists he squeezes Cal into (which I won’t ruin by revealing here), peels away the stereotypical surface of the story and gets at something new, even as it reaches those timeless truths that are older than the oldest stories.

“This is a universe that has been ruined by it’s maker,” one of the undying bad guys says at one point. And I supposed you could make the argument that Ryman’s attempt to mix the archetypes of fantasy with the lore of Christianity, might ruin both universes—the fantastic infested with the religion of our reality, and the religion of Christianity reduced to “mere” myth. But even the bad guy rethinks his original thought, saying, “Still, anything that was perfect would not change. It would not be alive.”

Christianity, like all religions, is at heart, just a set of stories, a collection of “mere” myths. Why should it or Islam or Hinduism or Buddhism ever be considered perfect? As soon as we imagine we’ve got it all figured out, we stop changing and we die a little bit inside. It’s only in tinkering and experimenting and reinventing the old myths that we can keep them and ourselves really and truly alive.